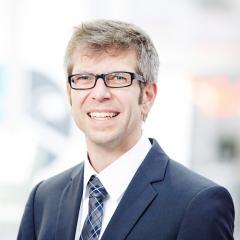 Senior judicial officer 1997-1999 in the public prosecutor's office in Siegen and Hagen. Senior judicial officer 1999-2003 at the insolvency court in Siegen. Deputy coordinator of the electronic land register project in North Rhine-Westphalia 2001 - 2004. During this time he was a member of the national working groups for establishing electronic court systems for insolvency-, land- and business-register.

He moved to the Ministry of Justice of North Rhine-Westphalia, Germany, in 2004. He is the deputy head of division in the division for information technology and e-Justice and co-ordinates the e-Justice activities in the ministry. Besides that he is a member of the experts groups for e-Justice, company law and insolvency registers of the European Commission and the Working Party for e-Law/e-Justice of the council of the European Union.

Since 2013 he is the project director of the e-SENS project. This is the so called large scale project funded by the European Commission and 20 Member States and Associated Countries to establish an interoperability platform for e-Government services in Europe.

As mobility of people and business within the EU increases, cross-border digital public services are a key policy priority in the internal market. However, cross-border e-Government services are still few since a number of challenges is faced varying between semantic, organizational, legal or technical ones. Delivering cross-border services to European citizens and businesses will be difficult, if not impossible, without interoperability among European public administrations. Since cross-border services require horizontal approach, they tend to run into more barriers than services provided on national level.

e-SENS is a Large Scale Pilot (LSP) aims to make it easier to provide cross-border digital public services in Europe by development of generic and re-usable technical components for seamless electronic and multilingual communication.