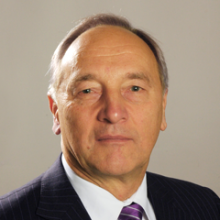 H.E. Andris Bērziņš has served as President of Latvia since 2011. Previously he was a member of the Saeima of the Republic of Latvia, where he was Chairman of the Economic, Agricultural, Environmental, and Regional Policy Committee, as well as president of the Latvian Chamber of Commerce and Industry. From 1993 to 2004, Mr. Bērziņš was president of A/S Latvijas Unibanka. President Bērziņš is patron of the European Academy of Science and Art and an honorary member of the University of Latvia. He has received the Order of the Three Stars, first grade, and the Order of Viesturs, First Grade.